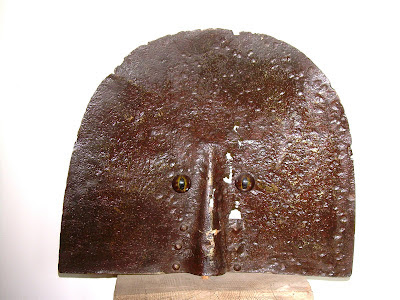 This is no doubt one of the most famous masks of Justice of Gondwana. In early times
it was thought to have dropped out of the heavens. Archeologists today believe that it
was actually made out of an old shovel. This, they say, in no way detracts from its significance.
In an age endlessly harrassed by incitements to hatred and frantic calls for revenge, my government is determined to reaffirm the intimately held convictions of the inhabitants of this nation as to the very nature of justice. Only recently, one of the wiser men of this land stated the matter in these terms:
Justice is not claimed for the victim: justice is not revenge.
Nor is it claimed for the culprit: it is not punishment.
Justice is claimed for the Law.
The Law itself steps forward as a plaintiff and calls for the protection of the court.
The court is the stage on which transgressions are displayed and the bounds and force of the law solemnly reaffirmed.
Justice thus understood – being neither revenge nor punishment – serves to heal the frame of the community, consolidate the norm and give comfort to all hearts – and even to those that it condemns.
These are the principles that my government reaffirms today as it wishes all peoples and all nations a future freed from the raging fires of hatred and fanaticism and lit by the sun and moon of understanding, forgiveness, serenity, reconciliation and peace.
Posted by Paddy's Blog at 10:26